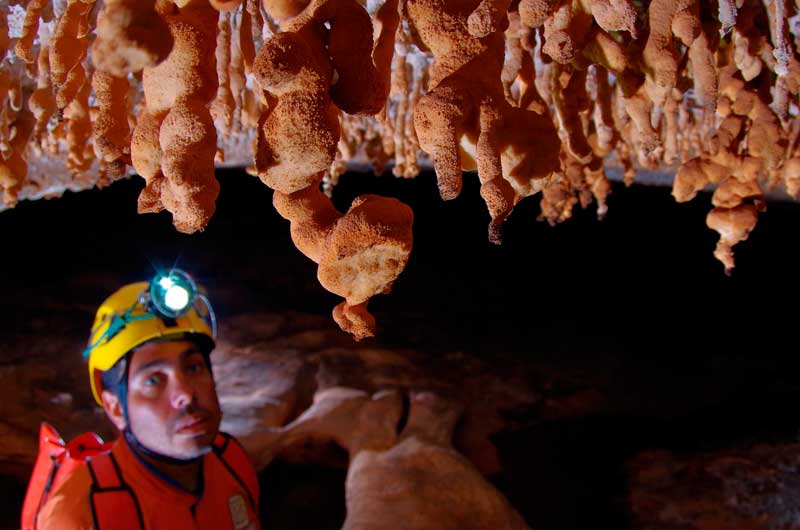 In March 2014 was staged a new act of La Venta research project in the eastern sector of the Auyan Tepui, again in collaboration with the Theraposa Exploring Team and with the support of the National Institute of Parks (INPARQUES), that led to the discovery of a vast underground system of over 15 km of development, called Imawarì Yeuta. The 2014 was especially dedicated to the documentation and scientific research of this vast underground system that is currently the largest one in the world in the quartzites; but some new explorations have been carried out, too.
The participants, 18 Italians, 5 Venezuelan and one Mexican, were divided into two groups; one larger, that was mainly dedicated to the documentation work of the Imawarì system, and one smaller that, with a series of advanced camps, tried to find new systems in some areas just to the north. Despite the adverse weather conditions, with fog and rain everyday and the resulting problems for travelling by helicopter and settling the camps, the results have been remarkable on all fronts.
From the exploratory viewpoint, new branches have been detected in the Imawarì Yeuta cave, which now reaches 18.7 km, and have been found other two caves genetically related that, although separated by a deep subsidence, bring the system to a total development of about 20 km. In the sectors immediately to the north, where we hypotesized the existence of other large systems of horizontal caves, have been found for now only smaller caves, with the exception of the Cueva dell’Arco, discovered just a few days before the end of the expedition, that in a last exploratory trip of 36 hours has been mapped for almost 2,5 km and explored for at least another 600 m.
All the caves in this area are rich in very peculiar speleothemes, mainly composed of amorphous silica (opal) and gypsum, plus other minerals still under study. Also from a morphogenetical and speleogenetical point of view, the caves show environments by many ways extraordinary and of not clear interpretation, involving a rethinking of the processes of formation of the caves in the quartzites.
The documentation part has engaged a lot of people for several days, with both photographic and video teams, for a total of several thousand photographs and dozens of hours of video footage in high definition.
On the scientific side, have been performed chemical field analyses of the runoff and seepage waters, have been collected dozens of samples of water for further chemical and isotopic analyses, and the different speleothemes present have been studied.