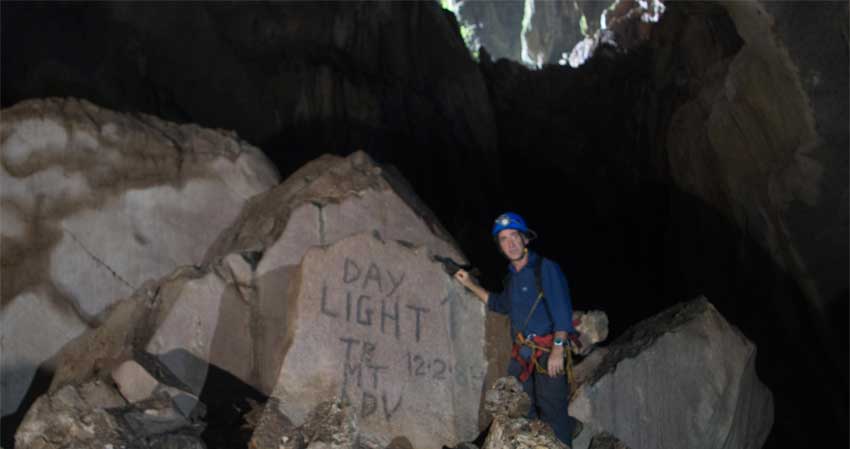 Yesterday many of us went to the Day Light, the upstream entrance of the underground river, the beginning of the system. There were many important things to do, including a laser scanning and a new polygonal survey both of the initial part and of the gallery below, until the first flooded passage.

We arrived there in less than a hour of walking, first crossing the green rice paddies, then penetrating in the pluvial forest. A last tiring and sweaty ramp about fifty meters long leads to the large cave that constitutes the inactive entrance. At the end, after several very slippery passages, opens the black of the gallery below: a slide about fifteen meters long followed by a 25 meter jump in the void allows us to put our feet on the wet pebbly shore of the base level. The first Australian explorers called it Day Light, when they arrived here, because it is what you can see looking up. 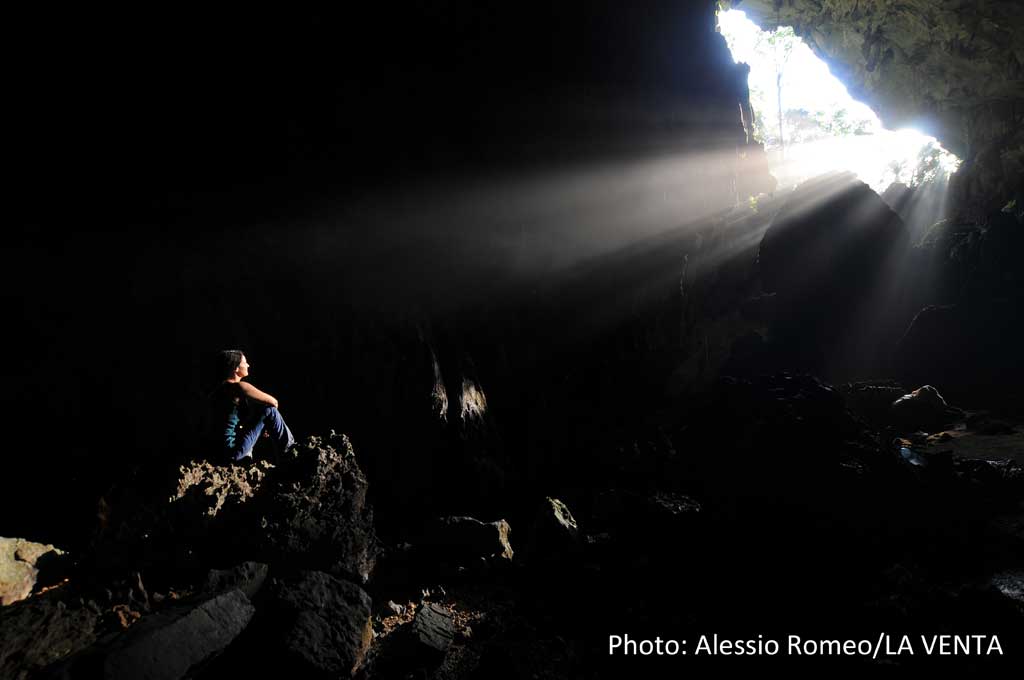 I precede the others and go down. When I arrive, having some time, I decide to make a trip toward the upstream part. Walking alone in these tropical caves is stimulating like in normal caves, but here it is more fearful because of the animals you can meet. The fauna of the Puerto Princesa Underground River is various, copious and sometimes fearsome.

I climb a landslide among the swiflets swirling and emitting their typical eco location tick. After a passage between two boulders I turn left abruptly, almost knowing what I am going to see: on the side of a big stone a giant Scutigera is looking at me. It is at least about 30 centimeters long and I have never seen a bigger one: I am more scared than in front of a migal (a hairy tarantula) because with its 15 thin pairs of legs it is light, fast, and when it reaches this dimension, rather poisonous. 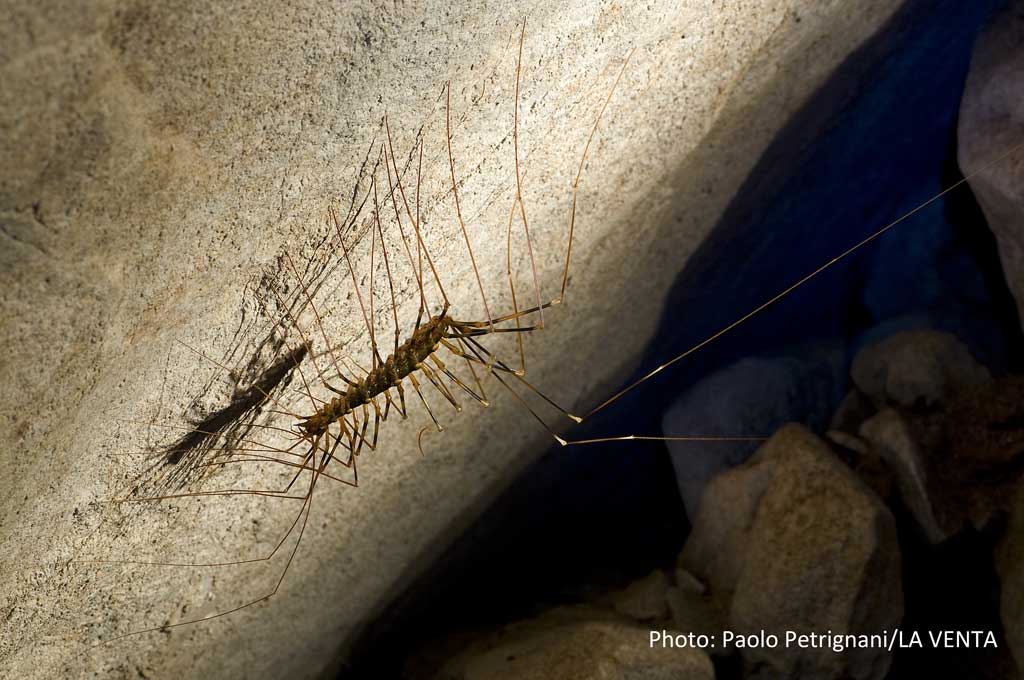 I walk off and decide to come back, even because the others are descending the P 25. When Leo Piccini arrives, he pulls out a drawing with the existing survey and shows me some areas that are not very clear, that is the reason because he is making the main polygonal again, helped by Ilenia. Above us appears the beginning of a high gallery, unexplored: I decide to climb another landslide to get closer and give a visual reference to Leonardo, helping him in the measurement. I climb slowly, sighting and avoiding a couple of migals in their den. When I get to the top I realize I have climbed 25-30 meters and I am practically at the beginning of the access pit of the Day Light. The unexplored gallery starts about a dozen meters higher, but it can be reached more easily through a superior balcony that we will be able to explore another time. While I evaluate the exploratory possibilities, I turn my eyes around the environment and I remain dazzled. At a dozen of meters from me, on the vertical side of a large stone, appears some writing: Day Light, next to an arrow pointing to the access pit. And below, the initials TB, MD, ADV, followed by a date: 12/2/89.

I am excited and puzzled. It is mine, but I don’t remember to have written it. Probably it was at the end of a survey trip, when I arrived here with Marco Topani and Antonio de Vivo, during the first expedition in the Philippines. I barely knew Tono, and in the initials I wrote a more forma A instead of the T of the following years. I borrow a camera from Tommaso and I ask Ilenia to help me in the shooting: I can’t help but take a picture next to that writing, over 28 years after, because it represents an important moment. It is part of a short period, about fifteen months, when happened speleological events that influenced my life, not only speleological, and that of many other people close to me. 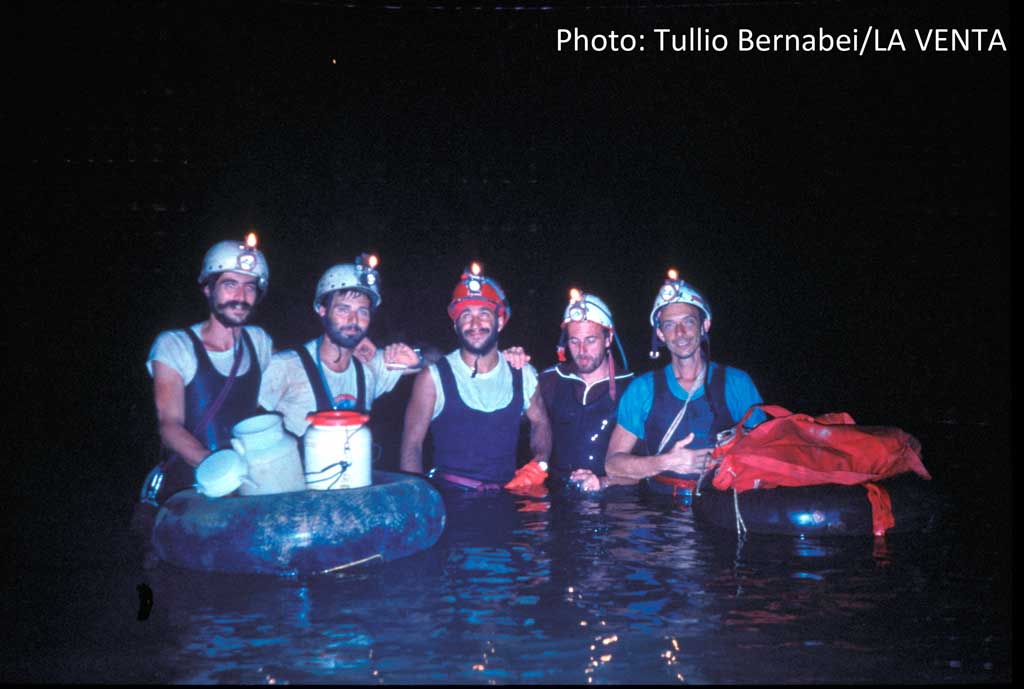 Less than 4 months before, in October 1988, with Marco, Dino Bonucci and Matteo Diana, we put the end word to the race to the bottom of Pozzo della Neve, entering with the siphon closed and forcing up to -1050 meters, the second Italian “minus thousand”. Few months after we began, with Samarcanda 89, the epic of the great expeditions abroad, and especially the international research campaigns in Central Asia, that are still continuing today. Just returned to Italy, in August 1989, we were involved in the race happily called ”hurdles” to the bottom of Cul di Bove, in the Matese mountains. And finally, in January 1990, less than a year after, we descended the canyon of the Rio la Venta: again the three of the signatures on the stone plus Gaetano Boldrini, Matteo Diana and Marco Leonardi. Shortly after was founded La Venta Association, that has taken us until here, transforming the dreams of a group of friends in something that maybe we are not able to understand yet. That day, 12 February 1989, belongs to history.