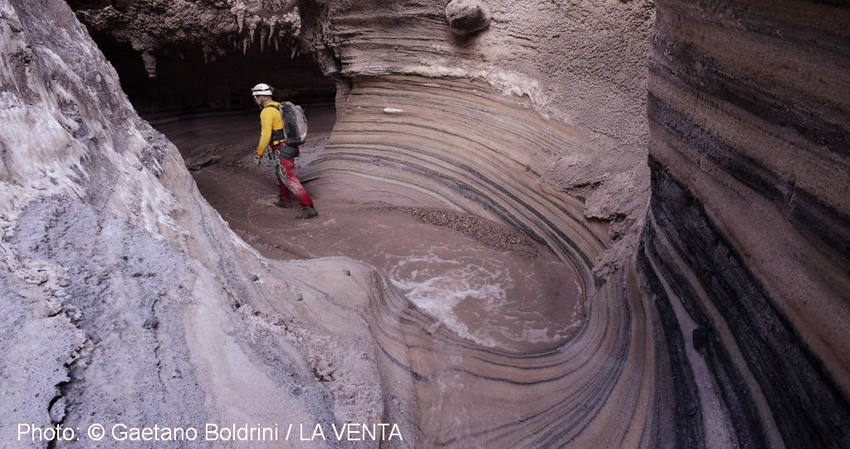 After a fruitful first week from the scientific point, but not gratifying from the exploratory one, the long awaited discovery of new cavities has arrived.
A group of 17 Italian speleologists and some Iranian friends have worked to clarify the phenomenon of the Saline Diapires in the Fars and Busher regions south of Shiraz. 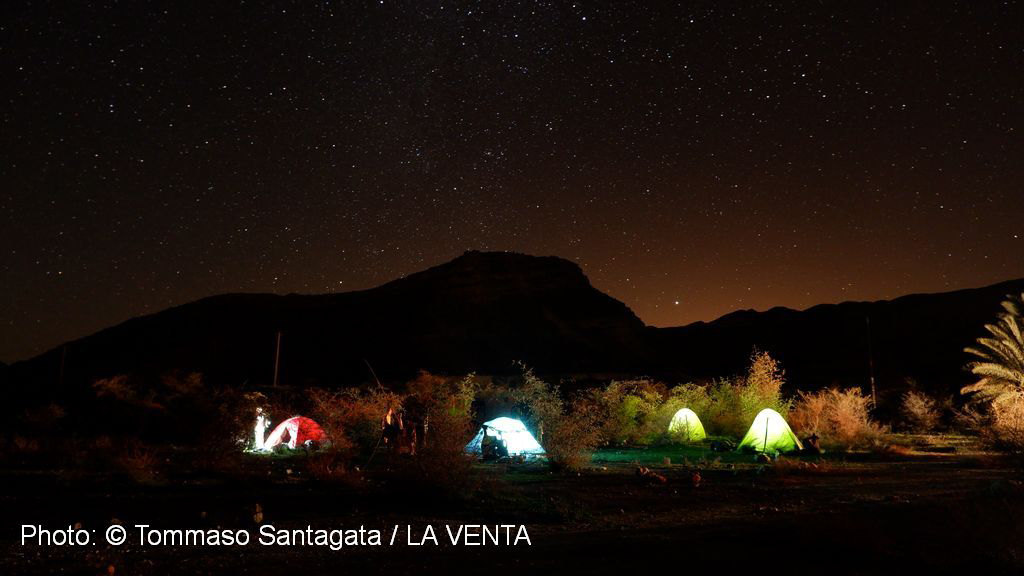 We started by resuming the mapping and research activity of the salt puddings of Koorab and Jahani, which were the two points of arrival of the previous expedition, here we have descended wells and explored resurgences, but the first because of the collapse of the layer of superficial blanket they close all around 30-40 meters, the second, close in tight pertugi or in salt flows that block the passage. 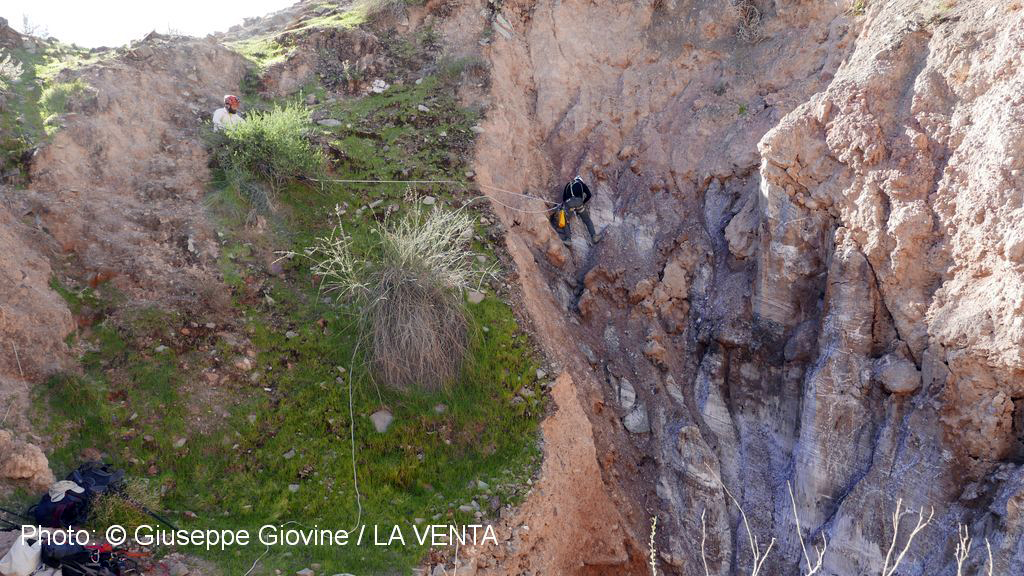 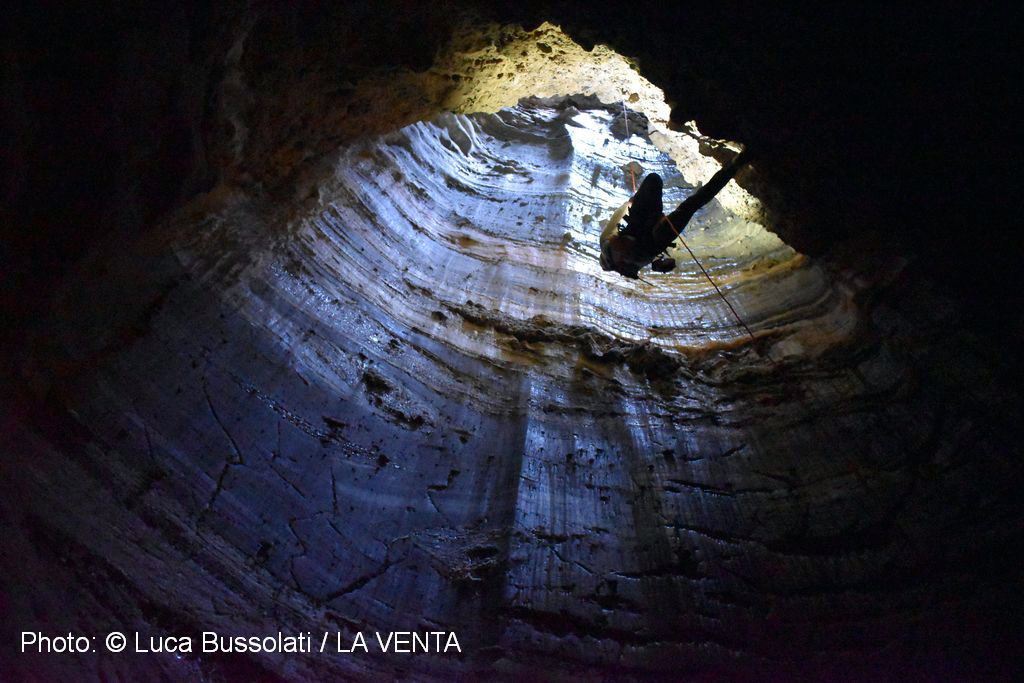 As a result, and closed the chapter Diapiri salini in the area of ??Firuzabad (Fars), we divided into two groups, one to end up exploring two smaller Diapiris in the area near the town of Lar, where the limited speleological interest was confirmed, the second group instead moved directly to the south, on the salt Diapiro known as Kuh-E-Namak (Dashti). In the Zagros mountains of southern Iran the Kuh-e-Namak (salt mountains in Farsi) are so many that identification is often facilitated by bracketing the name of the nearest district or city, or citing a numbering system (still incomplete). 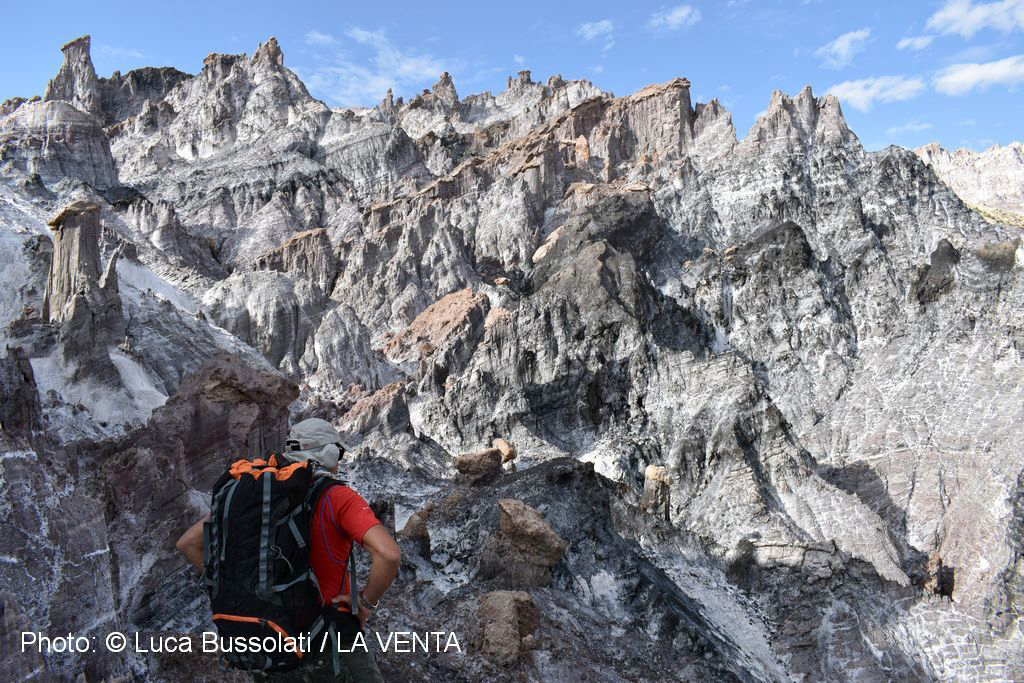 An entire Diapiro of considerable size, 36 square kilometers, 1,400 meters of salt share totally emerged. A spooky landscape, something unexpected, a constant salt sheet, trouble falling !, here we found areas of contact with sandstone and limestone, which gave rise to the creation of tunnels and tunnels dug into the salt, eroded by the water that it travels in its bowels. 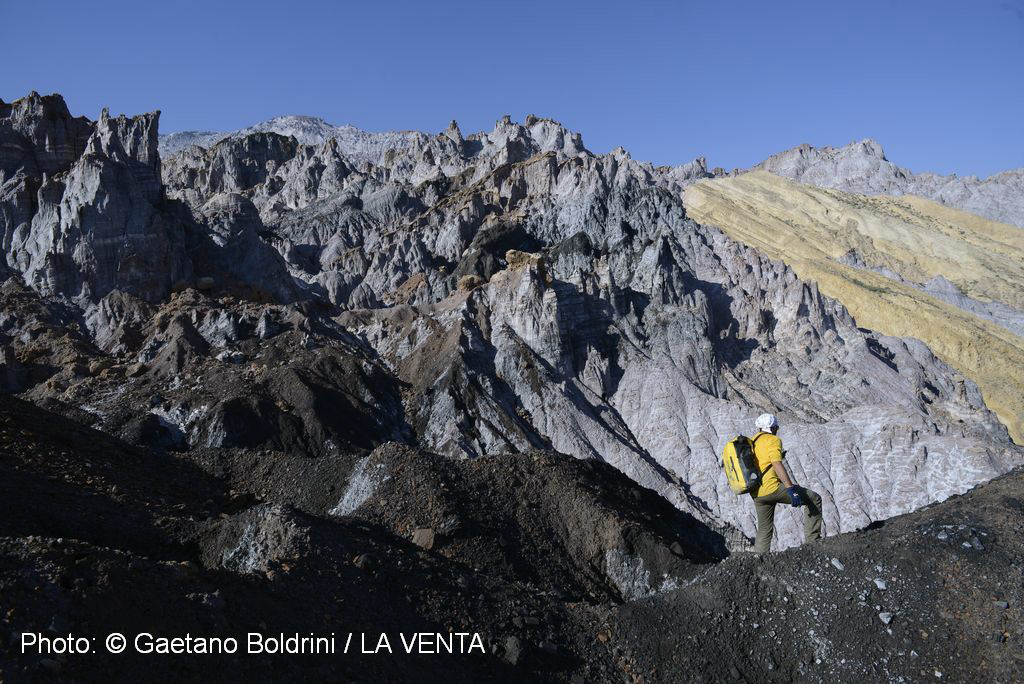 And finally the revelation, here the tunnels, the toboggans, the gorge closed and open, here the waterfalls, the ascents!
We have explored and surveyed almost 5 km of new caves, many of which are crossed by underground rivers that flow into the valley below.
Fortune wanted us to come across two days of torrential rain and so we just had to follow the water.
Unexpected environments, the colors of salt, the corrosion that distinguishes it, its hardness and its weakness after the rain, animal life inside it, an enchanted world inside a barren mountain, dry and inhospitable.
There is a next very technical expedition to get to the top of the Diapiro, chasing the upper entrances that feed the rivers and waterfalls that we want to explore.
Luca Imperio 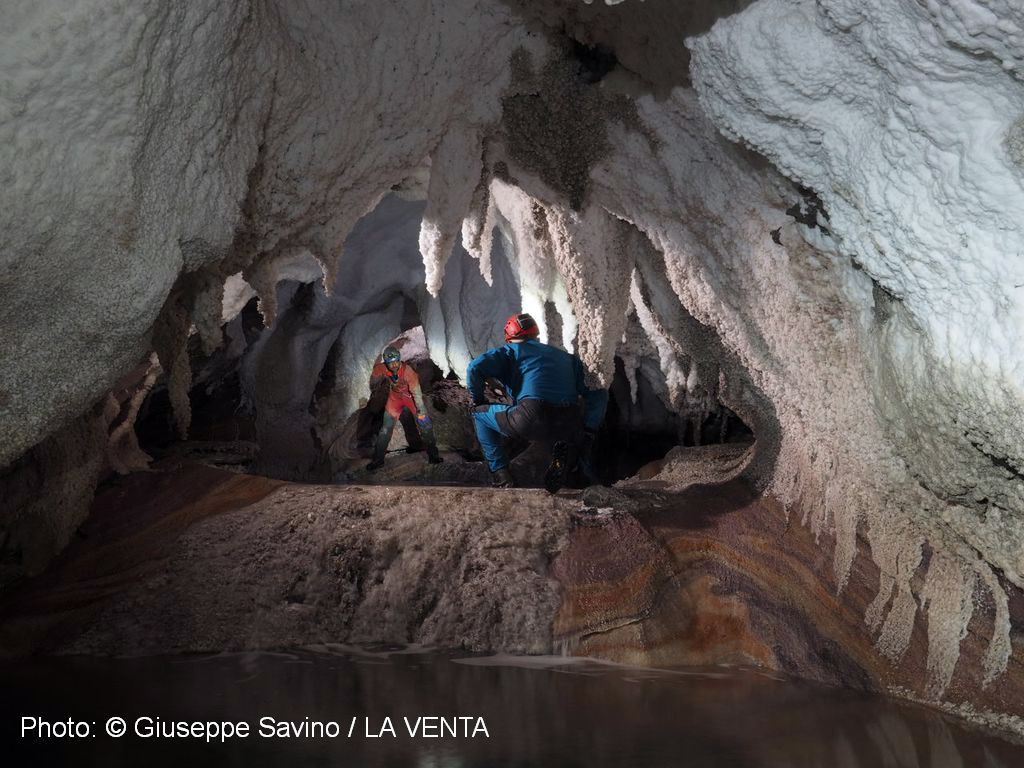 The salt of these diapers has settled over 500 million years ago in a shallow sea, spread over a vast area that goes from the current Iran to the Persian Gulf, accumulating in layers often alternating with limestone, marl and sandstone for a total thickness above 1000 meters. The salt deposit was then buried, remaining sealed under thousands of meters of other sediments. In the following eras, due to its characteristics of lightness and plasticity compared to the surrounding rocks, the salt was repeatedly squeezed and mobilized, finally reaching the surface, probably around twenty million years ago. Even today salt slowly comes out of many diapers, and once emerged it is made even more plastic by rainwater and runs along the surrounding slopes at very variable speeds, usually a few centimeters a year (but in some circumstances even higher than the meter / year) forming "namakiers" or "glaciers", so called for the obvious similarities with the glaciers. The caves explored this year are found right in the salt glaciers.
Marco Mecchia 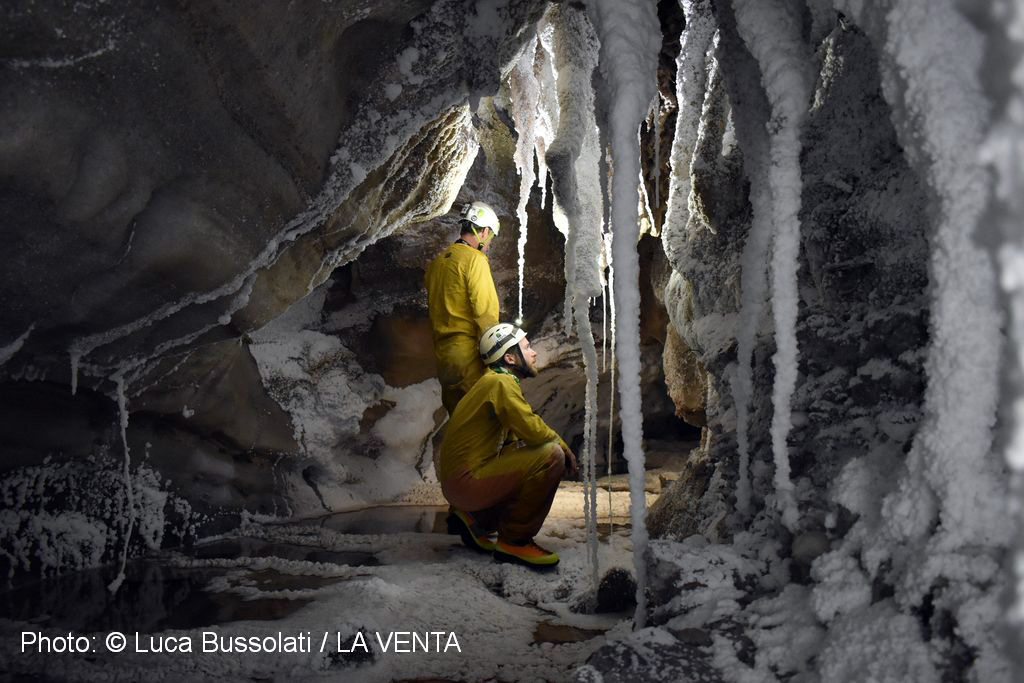 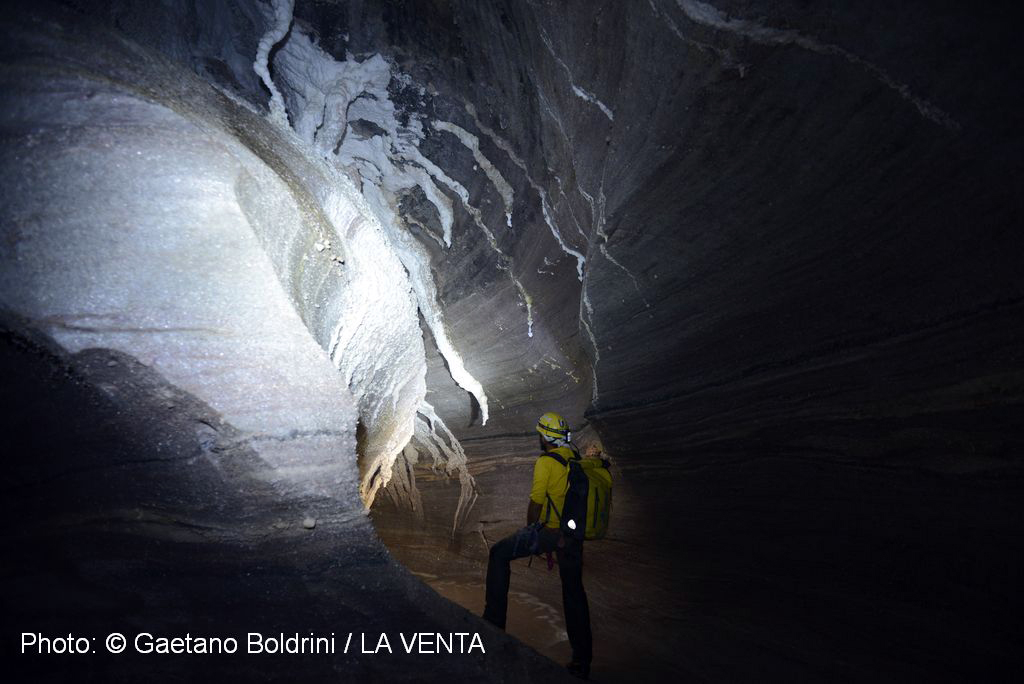