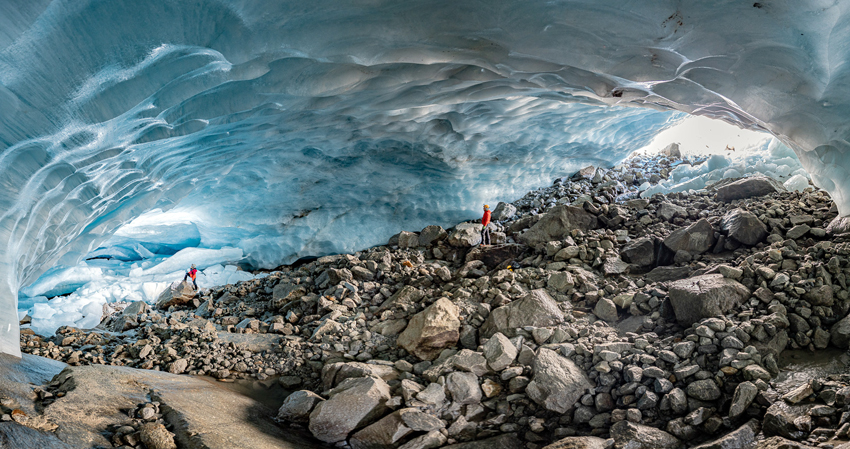 The October 2022 expedition concluded the monitoring of some contact caves on the Aletsch and Gorner glaciers, both located in the Swiss canton of Valais. The collection of data and topographic surveys is linked to a study organized and carried out by the "Inside the Glaciers" team, already launched last year through the project called "Northen Side of the Alps 2021". The La Venta Association always remains at the forefront in active support of such research.

This year's objective was the seasonal creation of the internal topographic survey and the recovery of a couple of temperature sensors left in August on the Gorner glacier, both outside and inside one of the most interesting cavities, with the aim of record the trend of the air temperature. Inside this cavity, in August, the temperature and flow rate of the stream that enters and which gave rise to it was also measured. 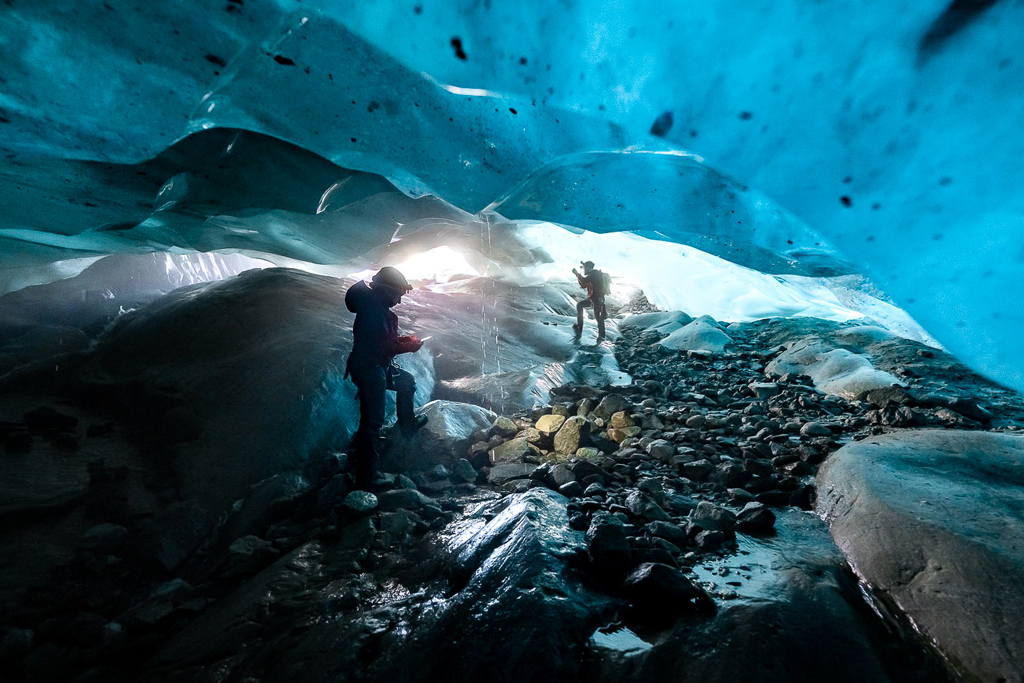 The circulation of water, with temperatures between 3° and 6° C and the presence of air currents coming from outside always above zero, are the main cause of this fusion process, hidden from satellites and others other types of remote monitoring.
We have no doubts that this type of cavity has a very large impact on the mass loss of glaciers and for this reason we have carried out a monitoring that would allow us to make an initial quantitative estimate.

Aletsch
Three of us leave for Alestch a day late due to rain. The fog sticks to us from the Fiescheralp cable car and will accompany us along the entire path. Around us only an unfathomable white! After almost two hours of walking, we arrive at the tunnel that will take us in sight of the glacier and at the exit, finally, we can glimpse a glimpse of blue which, fortunately, will accompany us until the following day. In a short time we will reach our goal: the Marjelensee contact cave where, to our great enthusiasm, the true blue awaits us, the unique one of this spectacular ice cave in the heart of the Alps. 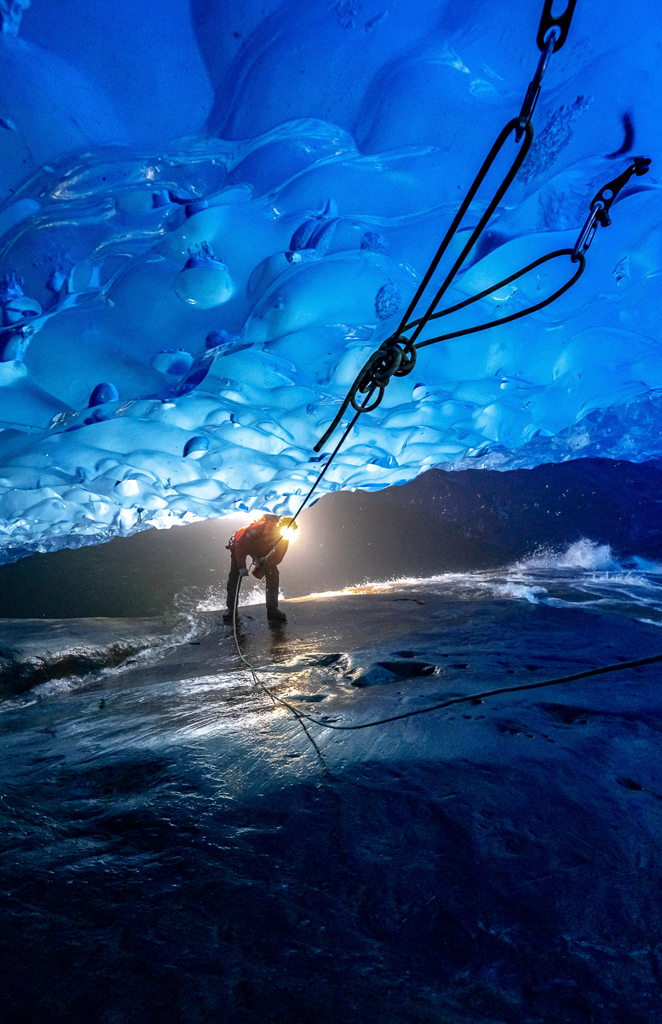 The external temperatures are high and the stream, which descends from the slopes in the direction of the cave and which essentially created it, is rather impetuous, a finding that we do not like, since we expect difficult water conditions inside the cavity.
Since 1864, not so high temperatures have been recorded in the month of October at Swiss weather stations as this year. An October that gave us abundant rains even at 2400 m a.s.l. where we hoped, that at least these days, they would be snowy. 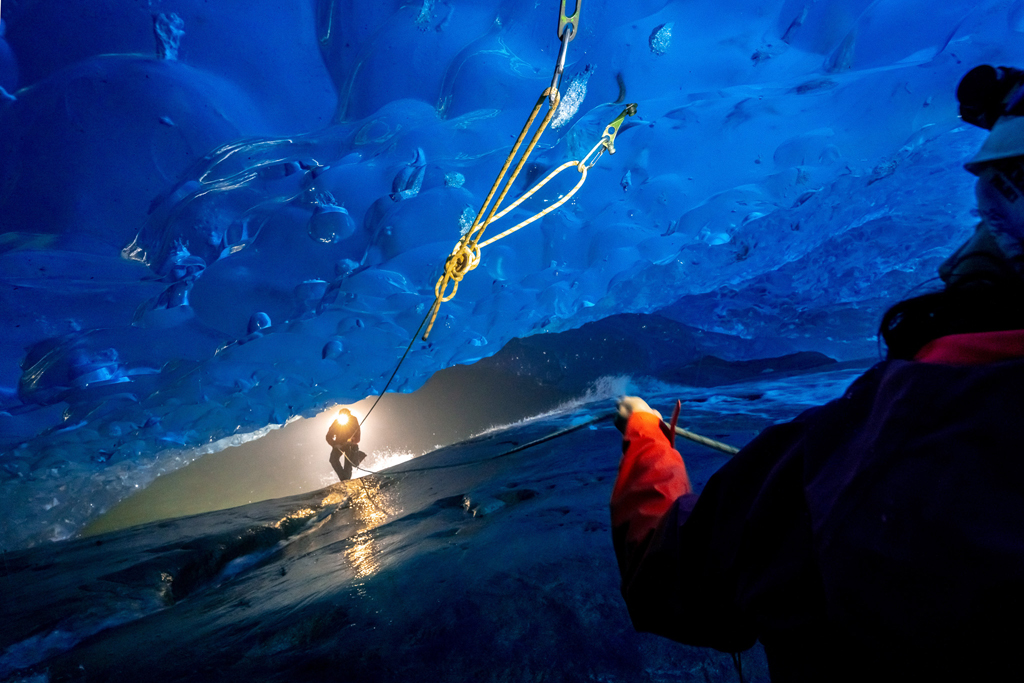 Arriving at the entrance, we notice the substantial morphological changes compared to 2021: the collapse of the entrance portal and the considerable reduction in its size, as well as the collapse of the glacier in correspondence with the cave and the consequent lowering of the vault that we can already guess from 'external.
As predicted, the water of the torrent overbearingly enters the main gallery of the cave, ending in a siphon lake a few tens of meters inside it, right there where usually, with the help of a rope, we reached a rather narrow passage about fifteen meters below (now submerged), a passage that has never been bypassed (at least not by us) because it is impassable every time due to the stream that flows through it ... and also for this year, with great disappointment, we do not have the opportunity to browse further. We dedicate ourselves to the survey, especially of the galleries to the right of the portal which have also been present in the last two years but which have also undergone a significant change by increasing their size and development. The entire cavity is pervaded by a cloud of humidity: nebulized water that sticks to the vaults of the galleries and creates dripping everywhere, this too certainly contributes to the fusion process. 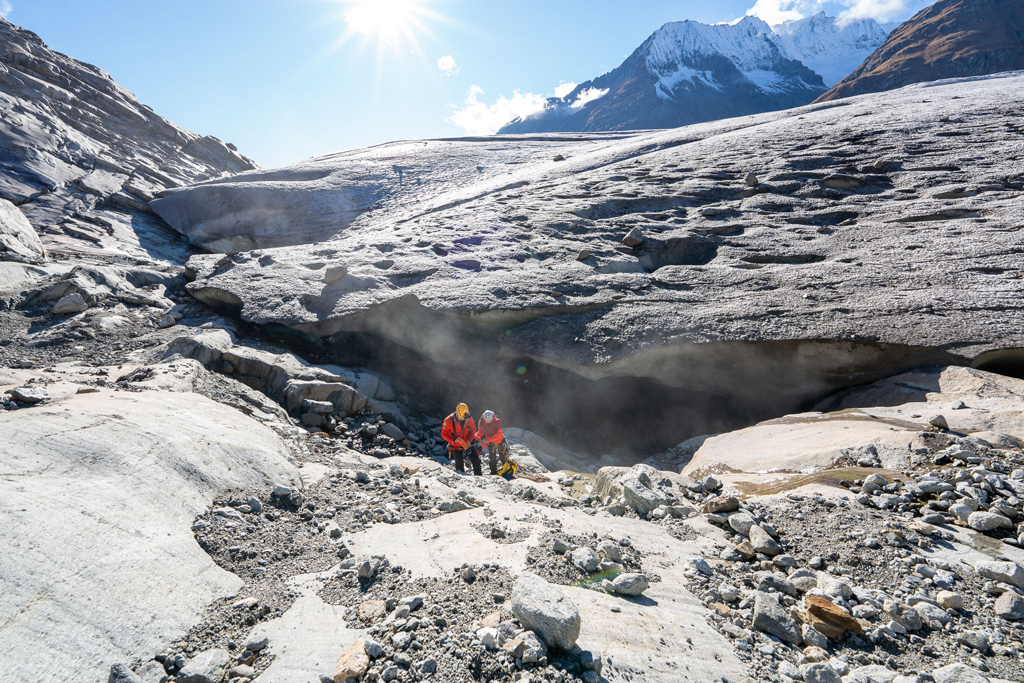 The next day we try to cross the glacier to explore the diametrically opposite side of the main tongue where the presence of a stream suggests the existence of a cave upon contact. Towards the middle of the journey, where the crevasses become ever deeper and perfectly perpendicular to our direction of progression, we decide to return, the time available to us is reduced and, as more rain is expected in the afternoon, we decide to leave the Aletsch . We are a little disappointed and above all frustrated by this anomalous weather, however another glacier awaits us the following day. 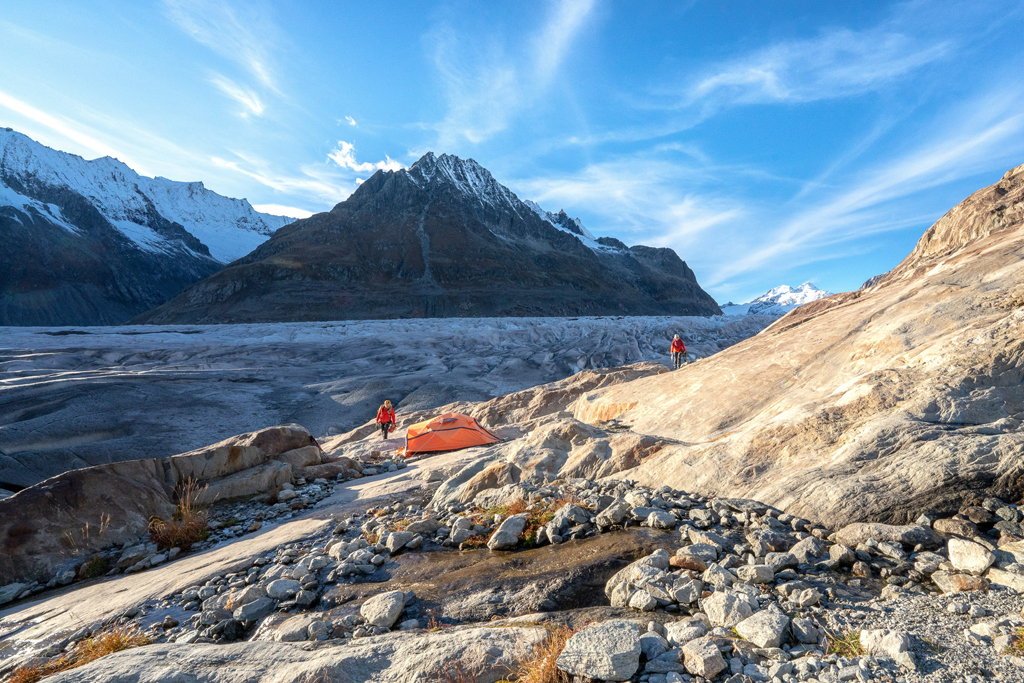 Gorner
Hoping for a drop in temperatures, we leave for the Gorner glacier. Ada and Tullio joined us to support us in the exploration and above all the relief of those caves at the point of contact upstream of the glacier. More precisely in the area of ice covered by moraine which represents the last relict mass of the Gorner glacier which for a few years now overlooks the valley suspended more than a hundred meters above the valley. 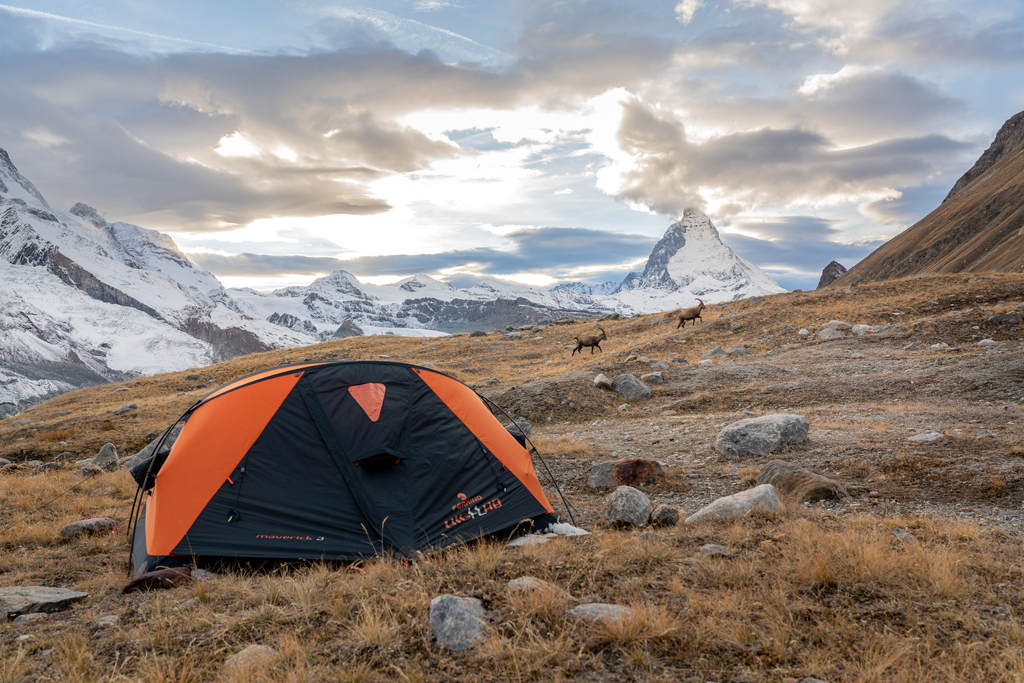 We find ourselves spending hours waiting in the by now legendary bathroom of the Rottenboden station at 2800m, waiting for it to rain, before setting off towards the area where we have decided to set up our base camp which, again this year, will be very before descending onto the ice in a large clearing at about 2600m altitude. The choice will prove to be an excellent decision, given that we had just enough time to set up the tents before the rain returned. Around 10:00 pm the rain will turn into snow with wet flakes, sufficient to embellish the grass in the field with crystals and useful to insulate our tents from the gusts of wind with a layer of ice. Has the cold finally arrived?
Also on the Gorner we soon realize that there are some quite remarkable morphological changes. The CC3 (CC stands for Contact Cave), the objective contact cave of our studies, welcomes us with an enormous collapse of the vault in the main gallery right where we had placed the sensor. Although it remained under the collapsed ice, it is still intact and we can recover it. We free it from its anchorage with record speed, fearful of another collapse of the ice blades suspended above our heads. 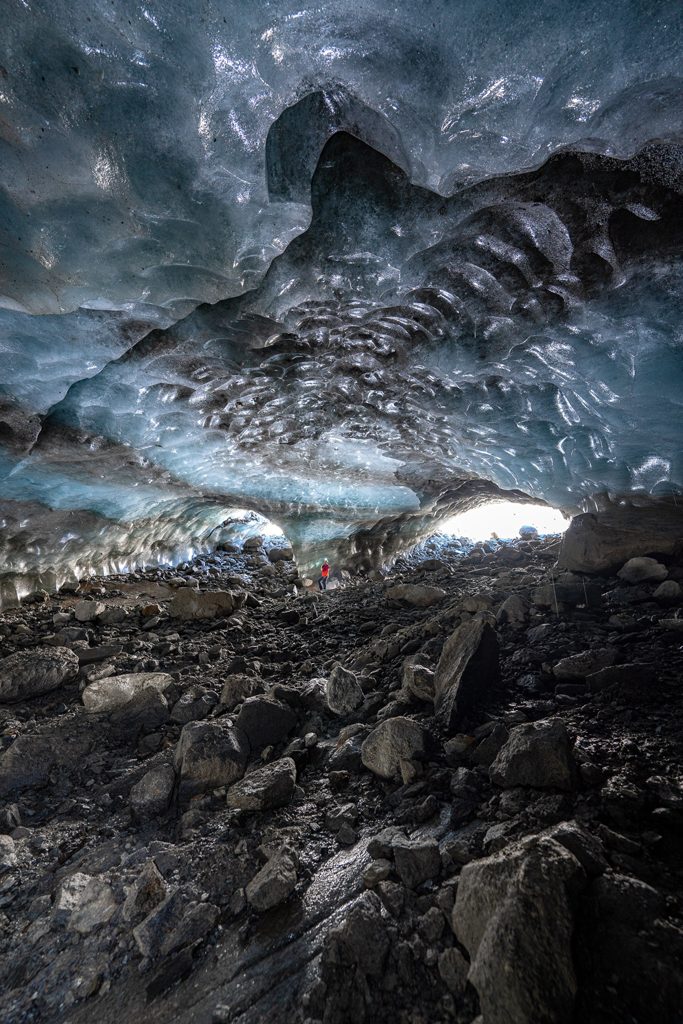 The collapse, even if it seems to block the tunnel irreparably, is actually surmountable. The rooms are morphologically very similar to a year ago even if the gallery is generally lower; we arrive at the area where our siphon exploration ended last October and we realize that the cavity continues and from the relief we will see that it creeps under the glacier, even if with smaller dimensions than the first part, for a good 200 m more, arriving to siphon after more than 400 m of distance from the entrance and with, approximately, 160 m of difference in altitude in descent.
The cave does not end here and turns out to be much more widespread than expected with a maze of large side galleries, all connected, never explored, which are much larger than the main one, in short, a good amount of work for the survey team! In total, approximately 950 m of development will be surveyed (return of the survey to be completed) even if we have not taken much more into consideration, out of prudence.
While we are inside the cavities, the external temperature rises and consequently the dripping and the fall of the rocks that detach from the outer edges of the glacier, fall on the entrances and roll inside. The sense of instability, in some areas of the caves, is strong and we have to do it as quickly as possible, paying attention to the vaults of the tunnels that we travel, topography and photograph. 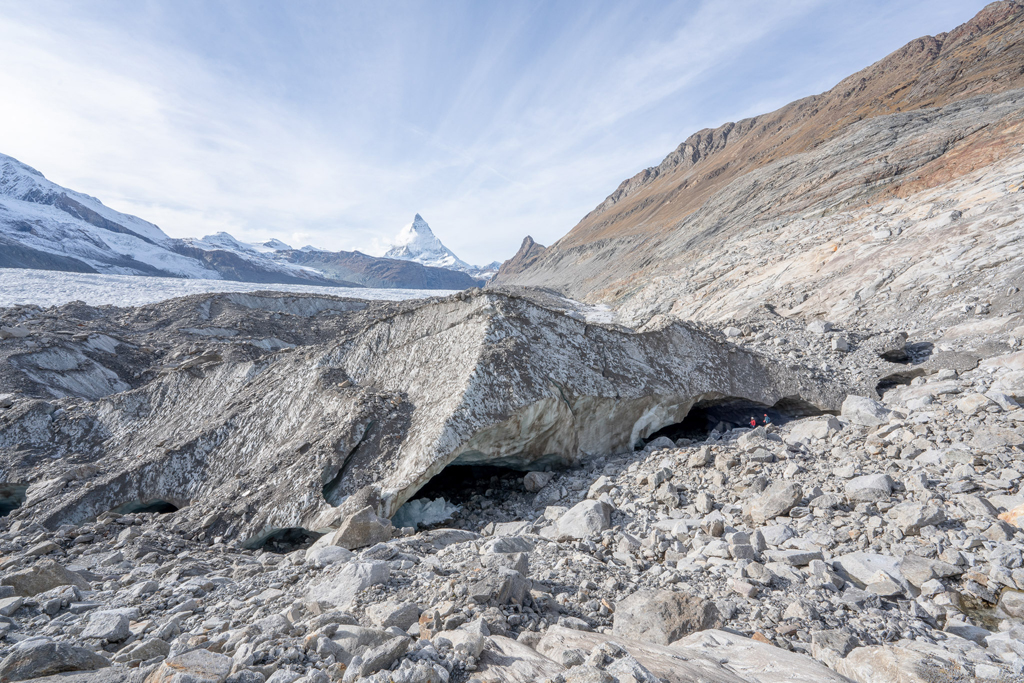 On the last day we split up: Sara and Luca go to explore a mill, a well about twenty meters deep, located on what remains of the residual tongue of the real Gorner glacier, the exploration ends on the rocky bottom where collapses prevent continue and follow the flows of the stream that feeds it. This mill, which Alessio had also descended over 20 years ago during his thesis work, had more or less the same depth and became impenetrable due to a narrow passage in the ice. At the time, still in the center of this tongue which had quite different dimensions, there was a mill called G10 of about 60 m deep (year 2000) and this too did not reach the bedrock. This speaks volumes about how much ice thickness has been lost in these years and how little time this ice mass has left before bringing the bedrock at the base of the mill achieved this year to daylight. 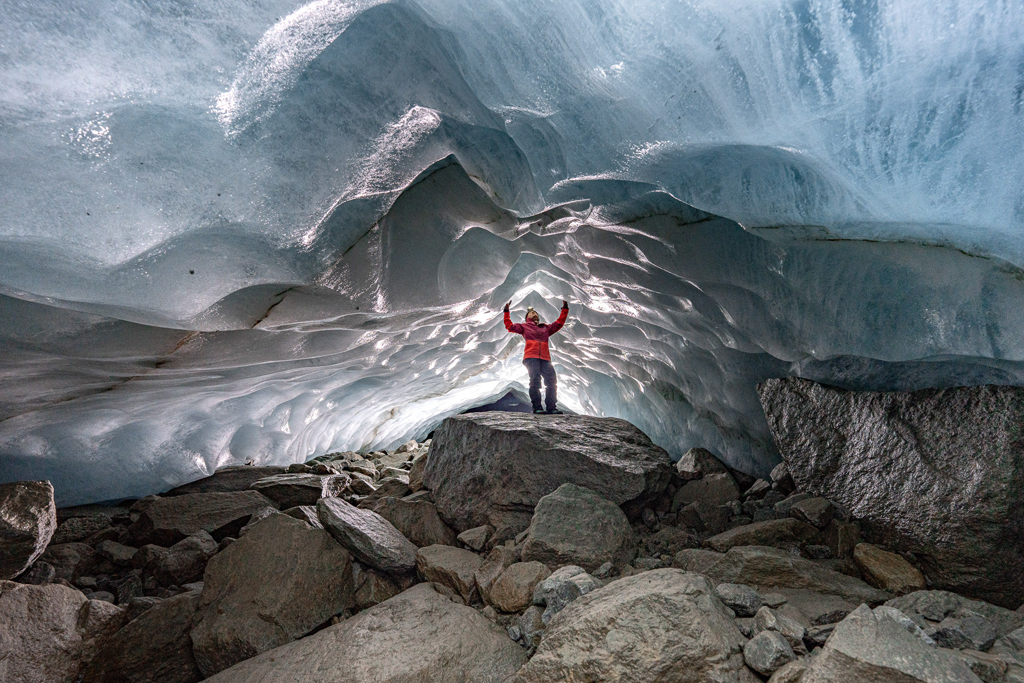 In the meantime Alessio heads towards another contact cave (the CCG, Contact Cave Gornersee) which forms every year due to the presence of a stream that descends from the lake below the Rosa Hutte refuge. The entrance portal is very large this year and in front of it, in a very large area, large blocks of ice are scattered which in reality testify to the formation of a temporary lake between the glacier and the rock of which these large "icebergs" they delimit the edges … a photo found on the web later will confirm the hypothesis.
In this area a huge lake called Gornersee used to form which took shape in spring, accumulated thousands of cubic meters of water which then, towards mid-July, disappeared towards the valley in just 3 days through hidden ways. In the past, the phenomenon has created many problems in Zermatt and the valley populations, now there are canalization systems that limit the damage. I haven't heard from this lake since 2010 but who knows if it will reappear in the future?
However, a few years ago Zermatt suffered a flood in the summer, but it was not clear where this water came from.

While this mystery remains unsolved for the moment we will try to enhance our efforts to use data and measurements collected in recent years in order to quantify the impact that contact caves have on the mass balance of glaciers, in the meantime another year will pass before reviewing these suffering giants and their changes and this polaroid of data and documentation of ours from October 2022 cannot be repeated, but anyone who wants to can make a different one using ours as a comparison.
Between the measurements made in August, the continuous monitoring of external and internal temperatures, the 3D surveys carried out in the last two years by VIGEA and Flyability, we really have an enormous amount of data that will now have to be compared and analyzed for future scientific publications. 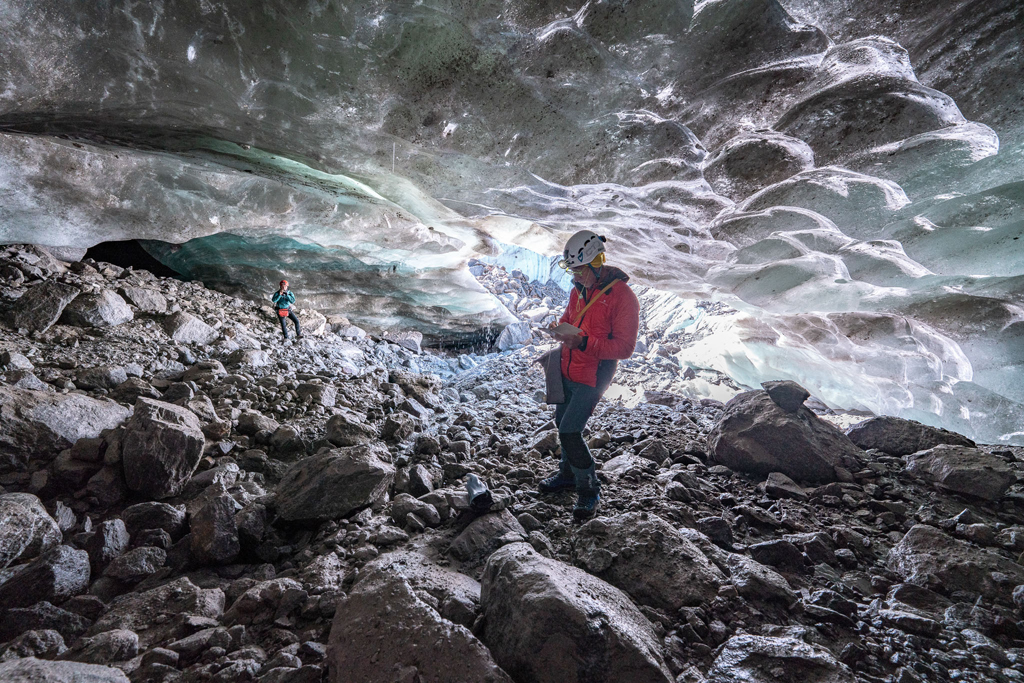 Returning to a glacier is a bit like visiting an elderly grandfather who lives far away. You realize that he is slowly dying out and you don't know how much longer he will be with you. You are happy, excited, but at the same time a melancholy accompanies you.
In recent years we have often returned to the same glaciers and this is the feeling that assails us every time... we see these old grandparents disappearing faster and faster and we are aware that this process is not currently reversible!