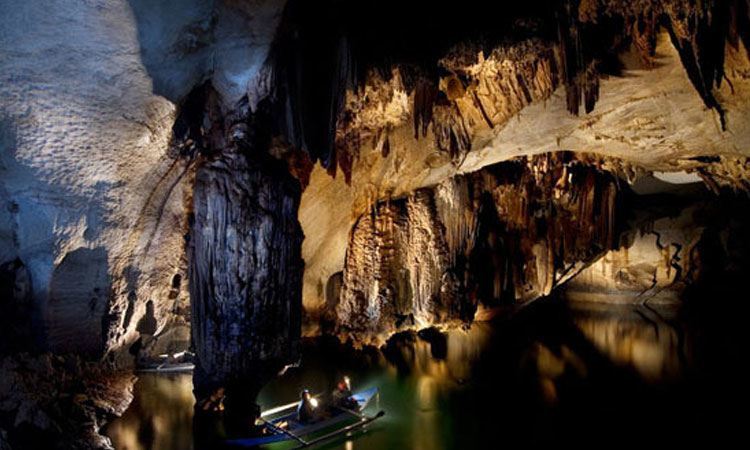 Geographical area: the island of Palawan, southern-western Philippines, a strip of land jutting out toward Borneo.

The island of Palawan is located in the western sector of the Philippine archipelago, where it forms the border between the South China Sea and the Sulu Sea. The island , that has a long and narrow shape , stretches out towards Borneo and is one of the largest and most beautiful in the Far East. Among the many natural beauties of this island there is the Puerto Princesa Underground River (PPUR): a karst complex of over 30 km that develops in the Saint Paul Dome, a limestone mountain over 1000 m high. The cave is inhabited by huge colonies of swallows and bats, as well as many other species of terrestrial and aquatic animals, and for this reason it is one of the richest subterranean ecosystems on the planet. These are the main reasons that have made it possible in 1998 to enter into the area, that is national park since 1971, collocated in the UNESCO list of World Heritage Sites and since 2012 in the list of the “New seven wonders of nature”.
There is a special bond between Italy and this cave. Since 1989, in fact, italian cavers from various places alternate in the exploration of this extraordinary karst system. After the first explorations of the Australian cavers in the 1980s and 1981, it was started a first exploratory project from 1989 to 1991, under the auspices of the Italian Speleological Society, that led to the discovery of new large branches, making this cave the most important of the Far East.
In 2000, a group of La Venta team returned to the island with the aim to make a documentary about this extraordinary cave. From that expedition originats the new project "Palawan" that can be considered as one of the most important Italian caving projects outside of Europe. 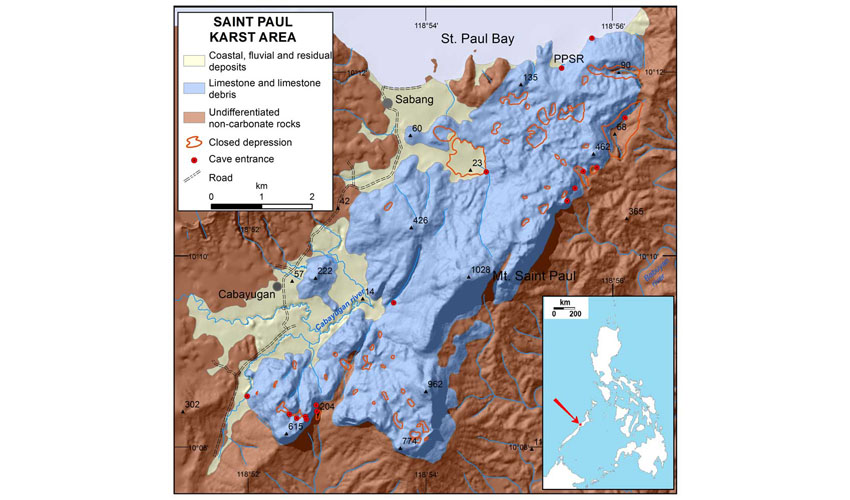 The "Palawan" project
Since 2007, La Venta Association has resumed the study and exploration of this unique karst area, thanks to the efforts and the invaluable support of the administrators of the city of Puerto Princesa, concentrating our efforts on the documentation work. With this new project has begun the search for other caves in the upper parts of the limestone massif, leading to the discovery of two deep and active cavities. New and unexpected discoveries inside the Underground River ended up with a development of more than 32 km of tunnels explored, including a new sector, characterized by large galleries full of concretions of spectacular beauty.
The2011 expedition resumed the exploration of the Little Underground River, a cave that opens onto the cliff just NE of the PPUR. Furthermore, we reached for the first time the summit of Mount Saint Paul, 1028 m high, discovering an absorbing zone that would lead to the exploration of new caves of vertical development.
At the same time we started an extensive scientific research dedicated in particular to the caves’ geological, mineralogical and geomorphological features.
In these last expedition was made a full photo shooting of the whole area and of its caves. This material has already had an editorial output on the italian edition of the prestigious magazines GEO and Oasis. In 2013 it was finally published a monograph entitled “The River of Swallows”, dedicated to this extraordinary karst area. 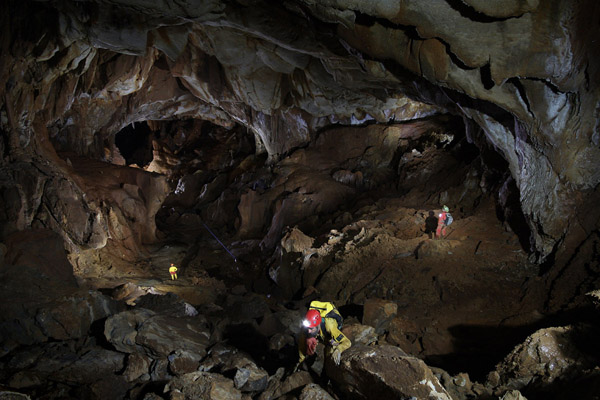 Future prospects: This area that can still reserve big surprises. Inside the Underground River remain some branches to explore. But it is especially outside that  major new discoveries are possible, particularly in the northern and in the southern-eastern sector, which was reached for the first time only in 2011. In the summit area of Saint Paul were identified vertical cave entrances and sinkholes that drain a small hanging valley, opening up the possibility of exploring caves wit ha vertical slope and with a maximum height difference that could theoretically be as high as 1000 m.