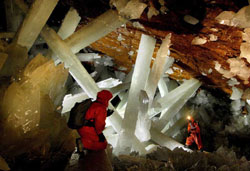 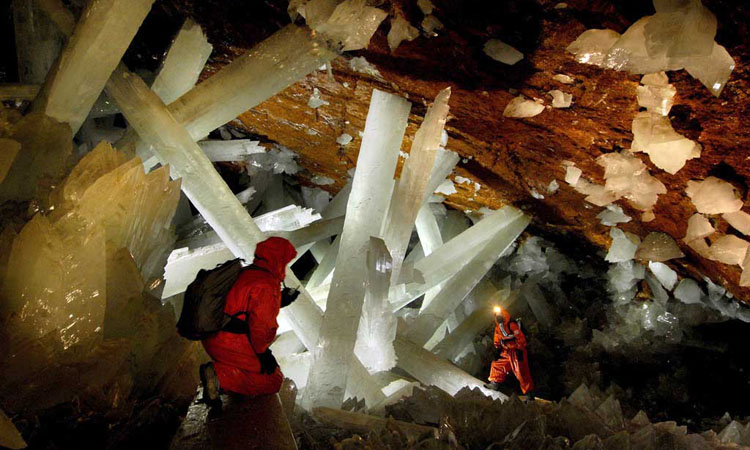 NAICA: THE CRYSTAL GIANTS
The project of analysis and documentation of the caves discovered in the mine of Naica, particularly of the amazing Cueva de Los Cristales. In 2000, in the depths of the mine of Naica, in the state of Chihuahua, Mexico, we discovered one of the world’s underground wonders: the Cueva de los Cristales. It is an authentic geode. That is, a cave completely covered of white selenite crystals, some of which are longer than 10 metres, the biggest crystals in the world.
The management of the Compagnia Peñoles, a farming agency, has proven to be extremely interested and has tried to protect rigorously this immeasurable place.
The association La Venta has run the Proyecto Naica from 2006. This project aims to scientifically document and spread knowledge about this extraordinary phenomenon. 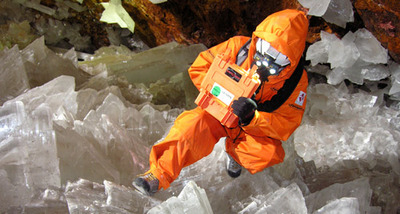 Its partners are SpeleoResearch & Film and C/Producciones, a well-known production house in Mexico City, specialising in nature documentaries. Also involved in this project are various world research institutes, dealing with specific scientific research topics.
The main goal of the project for La Venta is to study mine-caves of this area in order to extend the knowledge of the mechanisms of origin of giant selenite crystals and to define factors ensuring the genesis and development of different layers inside the cave.
In Naica underground processes are as much active now as they were in the past and are more complex than normal processes. Therefore they are crucial in order to better understand the mechanisms at the basis of karst development in its broadest sense.
Furthermore, as recently demonstrated, mine-caves are fundamental not only on a theoretical level but also on a practical one, as they allow us to study the processes that monitored and influenced the mobilisation of certain types of mineral deposits.
In particular, inside these caves over 40 minerals have been discovered so far, one of which has probably never been described.
Researchers of the Proyecto Naica are also developing criteria for the conservation, safeguard and dissemination of this complex of caves. In addition, they are carrying out micro-meteorological analyses, environmental monitoring, and they are studying the impact of anthropization. What is more, they are performing analyses of the interaction between caves and outside meteorology and of long term changes of environmental parameters.
Currently there are still undergoing analysis and publications of  the research results, but the firm holding the mining rights is not allowing new research campaigns. Notice:
Often we receive requests on how to visit the Cave of Crystals, our Association, unfortunately, no longer performs research in the Naica Cave for several years.
We do not plan further expeditions and we do not know what is the current situation for the visits.
Probably is no longer possible to visit the cave because of the works of the mine, but the only way to know it is by contacting the direction of the mine of Naica.
Partners: Dip. Geomineralogico e Dip. di Medicina Interna e Immunologia dell'Università di Bari, Dip. Scienze della Terra dell'Università di Bologna, Dip. Scienze della Terra dell'Università di Firenze, Dip. Scienze della Terra e Dip. di Paleobiologia e dell'Orto Botanico dell'Unviersitò di Modena e Reggio Emilia, Dip. Fisica Generale dell'Università di Torino, Politecnico di Milano, Polo Reg. Lecco, Laboratorio Sensibilab, Universidad Nacional Autonoma de Mexico, Instituto de Geologia de Mexico, Dept. of Earth Science of University of Bergen-Norvegia, Dep. de Hidrogeologia y Quimica Analitica de Almeria-Spagna, Estacion Experimental del Zaidin - CSIC Granada-Spagna, ETH Zurich-Svizzera, New Mexico Tech of Socorro-USA, Dept. of Biology of the New Mexico University of Albuquerque-USA.
Geographical area: mine of Naica, 100 km south of the town of Chihuahua, northern Mexico.
Future plans: numerous researches carried out in the period 2006 to 2009 led to an accurate understanding of the phenomenon. In the coming years the project will focus on the research of similar structures and on the protection of these caves.

﻿﻿Scientific and conservation goals of the Naica-Peñoles Project Scientific side:
-to explore and carry out topographic studies of the caves of Naica, using 3D laser techniques, placing caves on three-dimensional layers of the mine in relation to the area of the deposit;
-the study of the karst region of Sierra Naica in its entirety;
-to constantly monitor physical and climatic parameters of the mine and of La Cueva de Los Cristales such as temperatures, humidity, atmospheric pressure, thermal and chemical sedimentation, partial pressure of CO2 on different points,  in view of the partial presence of tourists;
-to carry out microbiologic studies on bacteria living in such extreme environmental conditions and that seem to control, at least partially, minerogenetical mechanisms;
-to elaborate models with the purpose of describing the development in time and space of karst topography in the mine of Naica and to define minerogenetical mechanisms at the bottom of the deposition of gypsum crystals and other secondary mineralization present in the area;
-to perform laboratory analyses to identify mineral stages through x-ray on dusts and with Gandolfi Cameras, of SEM and EDAX analyses;
-to carry out sampling of possible waters and perform chemical-physical isotope characterisation;
-the recreation of geochemical conditions of mineral depositions by studying samples of stable isotopes and fluid inclusions (for the temperature of deposition) on rock samples obtained from core drilling and define their absolute chronology through uranium-thorium-lead dating;
-the analysis of  mineral samples through electronic microscope in order to verify if micro-organisms have been imported in the process of genesis and development of the crystals. Conservation side:
-to plan and perform, in agreement with the management of the mine, permanent video monitoring systems of the caves;
-the classification of each mega crystal through an analysis of their static stability;
-to bring back, if possible, crystals to their original condition before explorations, cleaning parts that have been trampled;
-to take action, if necessary, to restore crystals that are at risk of breaking up;
-to carry out a complete photo and video documentation of exploration;
the priorities and ways of reaching these goals will be defined in detail throughout the development of actions performed in the field.
Documenting Cristales
The task of introducing the world to a unique place is very ambitious.

The La Venta team and Speleoresearch & Films, a Mexican film production company, have produced films and documentaries in the most remote areas of the planet for major world television companies, and are committed to succeed in this task.
The project will be followed and reported on step by step, by a team of professionals chosen from among the best in the field of documentary production.
The project aims to obtain the best quality currently possible by using the latest and most sophisticated filming and photo technologies and by adapting them to extreme environmental conditions. The result will be the history of this cave and of the people who discovered and explored it.
The Cave of Crystals will be mapped using laser-scanning equipment in order to obtain 3-D images that will allow virtual trips. These trips could become real by means of physical reproduction and perhaps this will be the only way to admire this wonderful cave when, with the closing of the mine, it will no longer be accessible.