JUQUILA: DISCOVERING CAVES IN THE MAYAN WORLD
Research in an unexplored part of Oaxaca, through canyons, archaeology and wary local population. In the state of Oaxaca are some of the most extensive and deepest underground systems in Mexico, amongst the most important in the world. The karst area crossed by the canyon of Rio Juquila south of the town of Tehuacán is near one of the regions with more caves than any other part of Mexico and yet is 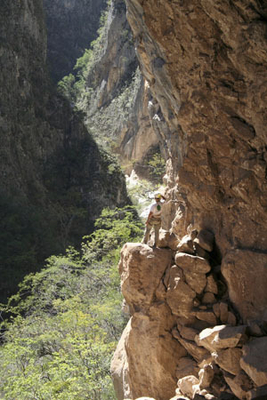 still barely explored. The entire area has a semi-desert climate and water flows almost totally underground, thus the few existing springs have always represented an immensurable legacy. It is right in this area that the pre-Columbian agriculture has its roots. The La Venta association carried out a series of expeditions in this region and discovered several caves, small ones mostly, but in some cases of great archaeological interest.
This project is purely based on speleological exploration. It started with an aerial survey in 2000 and continued in April 2002 with the first expedition to descend into the canyon (which develops for 15 km between massive limestone walls). With the 2002 expedition we started to explore the main caves.
The following year, a new expedition worked mainly in the highest parts of the plateau, east of the canyon, and discovered some vertical caves, up to 280 m deep, highlighting even more the potential of this area.
Other expeditions followed in 2004 and 2006. The last one in particular was focused on the extreme southern part of the karst area and led to the discovery of interesting relicts of hydrothermal caves. Although these relicts were fragmented and filled with debris, the expedition was very successful because of many important archaeological finds, such as extensive traces of human settlements.
The goal of the last expedition, performed in 2007, was to assess the potential of the highest area, exceeding 3000 m with the Cerro Verde, and to perform for the first time the complete descent of the canyon, in which several caves were discovered but only partially explored.
Despite remarkable discoveries on an archaeological level, in general there have not been any important speleological explorations. In spite of this, there is a considerable potential for exploration in the region, even though senile karst conditions make it difficult to access the vast underground systems.
Partners: Società Speleologica Italiana, Istituto Italiano di Speleologia, Club Alpino Italiano, Semarnat (Secretaria del Medio Ambiente y Recursos Naturales), Riserva de la Biosfera de Tehuacàn-Cuicatlàn, Comisiòn Nacional Para el Conocimiento y uso de la Biodiversidad (Conabio) - Mexico.
Geographical area: plateaus south-west of Oaxaca, 300 km south-east of Mexico City
Future plans: research in the field seems to be fairly complete; however there are still some unexplored areas which are potentially interesting. Senile karst conditions found in many of the explored caves makes it difficult to access vast underground systems without focusing research on intermediate areas of the canyon walls. If research is to continue it should concentrate mainly on archaeological caves.

﻿﻿﻿2002 Explorations
The 2002 Juquila exploration put a real strain on men and equipment during the 10-day exploration of the Juquila Canyon. 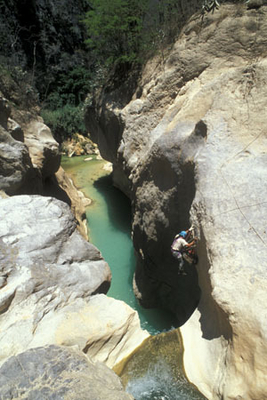 The group was immediately divided into two teams for efficiency and security reasons: the first team started on the top of the canyon and had the task of exploring it while descending; the second team, thirty five kilometres down, had to equip a base camp and explore caves and springs on that side of the canyon before finally joining the others. They succeeded in the task but not without problems.
Apart from thorns and hot temperatures, constantly present in our expeditions, underestimating travelling times caused major difficulties. The area has turned out to be harder than we expected.
The canyon morphology, with its numerous landslides and drops, plus some small incidents (congestion, knee strain, broken superciliary arch with stitches, various bruises) considerably slowed down the descent of the first team. Nonetheless, the six members of the team speeded up, using the remaining stocks and managed to meet the rest of the group five days after the start, right on schedule.
The second team, approaching the canyon from the bottom, had many difficulties too. Despite using horses to transport equipment, carrying bags on our shoulders under the boiling sun, through thorns, rocks and a total lack of water, in nine hours we managed to reach a pass near the canyon. From there, with two more hours of extremely difficult descent (700 m drop in 800 m of development) the group finally reached the location where they set up the base camp. From here they carried out exploration and logistic activities.
This first exploration has allowed the development of a long-term research project in the area. 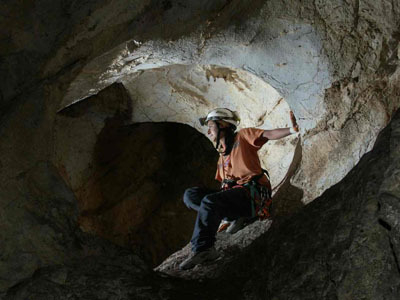 The main goal of this series of explorations was to assess the exploration potential of Cerro Verde and the Mauizapan plateau, and to complete the first total descent of the Canyon, from Tepelmeme to the banana plantation. Motivated by the authorisation obtained last year, we headed for the Rodeo, a rancho along the motorway, some kilometres before Tepelmeme. Here we obtained the official authorisation for the three teams (Cerro Verde, Mauizapan and the Canyon) and we hired some guides to take us at least as far as the Rancho Ica de Ruaria.
The Canyon team was left a few kilometres south of Tepelmeme, near Cerro Ciquiuite, without any precise information. They received rather vague directions on how to reach the waters of Rio Matanzas and from there on how to hike down to the beginning of the Juquila Canyon.
As a matter of fact, Rio Matanzas turned out to be a very difficult canyon, with long lakes, drops, and a couple of impressive bottlenecks (not larger than 2 metres with walls over 100 metres high and 3-400 m long). It took three and a half days to descend the first part of the Canyon. We noticed many caves on the canyon walls and took numerous pictures; however, due to a lack of time, it was impossible to reach them. In the most important bottleneck the team came across two snakes (one of them was undoubtedly a coral snake) blocking the two only ways on. We reached the confluence of Rio Grande de San Miguel and then to the beginning of Juquila. This is an amazing place where rocks are polished by floods and three very narrow canyons join together forming a perfect Y in the sky. From here, in one day we swam over one km of lakes, one of which was about three hundred metres long.
From this point it took one more day (the 6th) for the Canyon team to reach the area of Puente Colossal. During this day they explored many caves.
Several other caves were explored in the known part of the Canyon and, in particular, the large cave that had been noticed in the previous descent. Unfortunately this cave, like many others, ends up in a collapse after around fifty metres and presents a considerable fossil concretion with a wall of spar crystals, five to six metres high, indicating that in the past when the climate was rather different from today, this was certainly a karst.
While the Canyon team was descending, the other two teams discovered various pits. The most important discoveries seemed to be all around the area of Mauizapan.
Many caves were discovered and explored. Up until the last day we had good chances of finding the right cavity. Unfortunately, the most important cave which is formed by large shafts and contains lots of bats, closes at a depth of 70-80 metres. We explored another very interesting cavity, reaching an active meander at 35 m which carries on in depth, but bottlenecks prevented us from coming back.
Generally, many pits end up at mud and debris obstructions at around ten to twenty metres or, in some cases, at impracticable spots. At times, there are strong draughts and sometimes we experienced serious problems due to the lack of oxygen. Such difficulties prove that, particularly in the highest areas, the karst is too ancient or too recent to allow deep descents. As regards the majority of the blowing holes, these are located at lower altitudes, on the vertical of natural springs.
The return, as usual, was long and painful. Threatened by storms, some of us had to refuse the goat that Don Bernito cooked for everybody. In the end, though, we all met at the Rodeo, satisfied with the experience we had.
There are still many things to understand, several canyon entrances to reach. From there various phreatic tubes can be found and perhaps it will be impossible to access the system from the bottom. This area turned out to be more imposing and complex than we expected, the Canyon was 25 km long instead of 15. We still need to go down the Rio Grande de San Miguel, which is sure to provide us with some amazing adventures. As regards the fauna, various species can be found in this area. Not only did we come across two snakes, we also had a close encounter with a puma and with several other animals (small bears, scorpions, scolopendra, etc.).