A few weeks ago, between 5 and 18 November, the Tian Shan Geological Society and Foundation For The Preservation And Exploration Of Caves leaded an expedition to the Inylchek Glacier, one of the world’s largest mountain glaciers, located in the central area of the Tian Shan chain in the Issyk-Kul region of Kyrgyzstan.

23 speleologists from several parts of the world took part in the expedition: nineteen French members of the Association “regard sur l’aventure”, one Canadian, two Italians (the undersigned, belonging to the Association La Venta, and Michele Pazzini) and the Russian Bulat Mavludova, scientific coordinator of the project and doctor at the Institute of geography of the Russian Academy of Sciences”, and vice president of the UIS Commission for the Studies of Ice Caves.

The Glacier is formed as a result of the confluence of two large glaciers: the Northern Inylchek and the Southern Inylchek. The result of their confluence is the “periodically disappearing” Merzbacher lake, known since 1931, and located at an altitude of more than 3300 m a.s.l.. Each year the largest high-altitude glacial lake in Eurasia suddenly disappears. This generally happens every July – August, when the volume of water in the lake reaches its critical point of 1.2 million cubic meters.

In 2019 the emptying of the lake began on August 17. The purpose of our November expedition was the search and exploration of the inner drainage pathways of the Inylchek Glacier, a hypothetical network of tunnels and meanders from which the lake waters flow and, in a short time, reach the front of the glacier 15 km away. 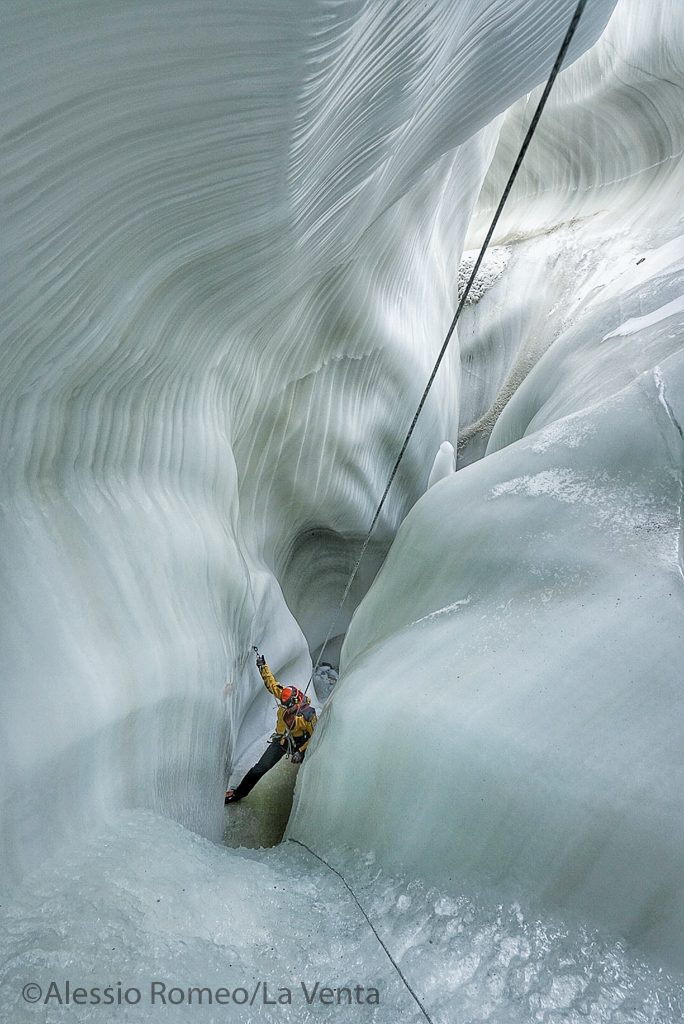 On November 6 from Karakol, covering 120 km in 6 hours, in two 6x6 military trucks we reached the front of the glacier at 3000 m a.s.l., where we spent the first two nights, for the clear need to acclimatize, taking advantage to explore the area. We found several fragments of tunnels both on contact and inside the glacier, all with never more than 100 m developments. This result is justified by the fact that in November we are more than two months after the emptying of the Lake.

Then the expedition moved to the Campo Stabile at 3500 m, 17 km far from the front. The first objective was the exploration of the lake and its shores but the project immediately turned out to be unworkable due to the presence of wrecks iceberg that hindered the progression. From 11 to 16 November more than 10 moulins and horizontal cavities have been explored, which unfortunately have never allowed access to the internal grid of drainage of the Merzbacher waters. The advancement of the season and the average speed of advancement of the glacier in this area did not give great hopes of finding deep tunnels as those that it was possible to find at the front.

However, the expedition ended with good results and laid solid bases for future shipments. The group has proved to be of great exploratory and technical ability as well as strongly motivated, allowing a constant and profitable daily work despite the difficult environmental conditions. The temperatures at the base camp were always between -5° and -20° C and the team dealt with an average of 10 Km per day of walk.

For any future explorations I suggest to change the period and risk an exploration close to the emptying of the lake, between late August and early September… to posterity the arduous exploration!!